I was featured on NBC News this week discussing this topic. Watch the video below.

As women, we have taken some big losses over the last few years.

We tried to elect the first woman president and lost.

We tried to block a supreme court nominee who committed sexual assault and lost.

Women also still pay more for their debt than men, are less likely to invest than men and are therefore 80% more likely to be impoverished in retirement. When it comes to business, women entrepreneurs raise less money than men and only 2% of female-owned businesses ever hit the seven figure mark.

The data is daunting: Women are afraid to ask for more money (and less likely to get it), afraid to make more than their partners, and afraid to put their careers ahead of their families needs (a worry men don’t seem to have).

And yet, we are living in a time where we women are ready to take back our power. The big question is: how?

How can we successfully create the change we want to see in the world? How can we create a world where equality reigns regardless of gender, race, religion, sexual orientation or national origin?

Martin Luther King, Jr. said, “History is the long and tragic story of the fact that privileged groups seldom give up their privileges voluntarily … We know through painful experience that freedom is never voluntarily given by the oppressor; it must be demanded by the oppressed.”

It’s time for us, as women, to turn towards our money. To begin to focus on our earning potential and our ability to generate wealth.

Money is a powerful tool. Let’s stop being afraid of what it means to have it and let’s start focusing on getting it so that we can create the world we want to raise our children in.

We need to start playing a game that we can win.

How do I know that you can win? Because that is my story, and I’m no different than you.

I’m a woman of color, the mother of four children and the CEO of a seven-figure business. I may be rich now, but I didn’t start out this way. When I was eight years old, both my parents got laid off and we went from a middle-class lifestyle to living in poverty. I saw that money has the power to change everything and I decided that I didn’t ever want to depend on anyone – a boss, a family member, a husband, a social security check – to take care of me.

I’ve been hustling since I was 14 years old working at the grocery store. I paid for college with lots of loans and my part-time paychecks. I was a bank teller by day and a waitress by night. I lived with strangers and relied on friends. I took breaks from college to work full-time, earn the money to pay for it, and then went back and finished. When I graduated from law school (also paid for with borrowed funds) into an economic recession, I hustled to build my own law firm with $300 in startup funds.

My point? I started with very little. I had drive and a family who believed in me and that was enough to put me on a path to economic power. The same is possible for you.

So if you are reading this, this is your call to arms. It’s time to bet on yourself.

PS: If building a business is your path to creating your own wealth (80% of self-made millionaires are entrepreneurs), my Glow Up Live program is a great place to start. Book a free Scale Session this week to learn more and see if it’s a fit for you. Don’t delay, we start next week! 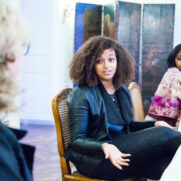 If I can’t make you a millionaire, WTF am I doing?

When I first launched Small Business Bodyguard, my lawyer friends thought I was crazy for promising that it would be all that a small business owner needed to protect themselves legally. (And it’s no wonder that other lawyers were against it! They were charging $250 an hour to “advise” on something like trademarks or contracts, […] 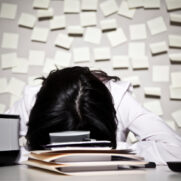 How to Know When It’s Time to Quit

“When it’s over, that’s the time I fall in love again …” Sugar Ray Despite what they may say, quitting isn’t actually easy. It is, in fact, quite difficult to give up a part of yourself that is no longer really a part of yourself, especially when you’ve devoted lots of time and energy […]