If you are selling a service, you must have all of your clients sign a well-drafted Client Service Agreement before any work begins. It’s not enough to have a Statement of Work or a handshake or a friendly conversation. None of those will sufficiently cover your butt when the excrement hits the wind-machine.

A Client Service Agreement is all about your relationship with your clients or customers, and it’s capital ‘E’ Essential. If you are a consultant, coach, or other service professional, it’s imperative that your clients know what to expect when working with you and what their responsibilities are in the transaction.

A well-drafted client service agreement memorializes the basic terms of your relationship with your client. It also provides next steps in the event something unexpected happens. It can prevent disagreements and confusion with your customers, which in turn can prevent any need for litigation.

So what should be in your Client Service Agreement?

Typical items covered could include:

But what about all that other stuff?

Sometimes business owners look at a client service agreement and ask, “Do I really need all of that legalese at the end?” The answer is: hell, yeah, you do!

The stuff at the end of your client service agreement is called boilerplate. These are standard clauses that are often found at the end of a contract to protect you if there is misunderstanding, confusion, or just plain trouble-at-the-OK-corral during the relationship with your client. The boilerplate clauses control what happens when the parties to the agreement disagree.

For example, the limitation of liability clause is meant to do just that: it limits the amount of liability you could have if an issue arises out of the contract. In other words, thanks to this clause, the amount of money a problem will cost you is limited and won’t be inflated by extra, over-the-top damages.

Recently, a client of ours who works as a consultant was threatened with a lawsuit by her customer. She had worked with her customer for 3 months, and when the engagement was over, the customer wanted her to keep working. When my client informed him that she was no longer available, he threatened to sue her for loss of profits.

By the agreement he signed, she couldn’t be sued for lost profits, and the term of the agreement meant she was not obligated to continue working with him either. She directed him to these clauses in the contract and never heard from him again. (We assume he is trying to bully someone who didn’t have him sign a Client Service Agreement.)

(By the way, this happened to an business owner we know because they thought it was enough to have their client sign a Statement of Work. As we mentioned in the beginning, this is a big no-no! A Statement of Work is not a Client Service Agreement!)

The moral of these stories is that all of that boilerplate at the end of your client service agreement is actually protecting you from the problems that arise when there is an issue under the contract. If you’re wondering if your Client Service Agreement is sufficient, be sure to talk with a small business lawyer. Next time, we’ll talk about some additional boilerplate language you might come across. 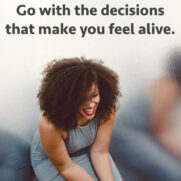 Take off your clothes. Sing opera. Make your wisest business decisions ever.

How do you make important business decisions? How do you know what to launch next? When it’s time to hire your next employee? Or when to STOP offering something so you can offer something much, much better? There is a quote from Danielle LaPorte’s book, The Fire Starter Sessions, that sums up the exact feeling […] 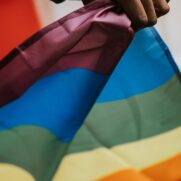 Happy Pride Month! 🌈 This month, people around the world are taking part in parades and events to commemorate the Stonewall riots, demonstrate for equal rights, and celebrate LGBTQIA+ Pride. (In case you don’t know what all the letters mean in the acronym LGBTQIA+:  lesbian, gay, bisexual, trans, queer, intersex, asexual/agender, PLUS all those who are […]