TW: The following are stories of my own experiences growing up with guns as part of everyday life in Queens. Beyond that I share actionable steps for moving from feeling powerless at times like these.

I was sitting in the bar area of a bowling alley waiting for the boy I liked to finish talking to one of his friends. I couldn’t sit at the actual bar cause I was not legally old enough to drink.

This was not the best place for a sixteen year old girl to be hanging out at night but, like I said, there was this boy I liked. Plus, they made really good hot wings.

There were families bowling with their kids. There were single folks hanging out at the bar and not bowling. There was a group of young people closer to my age that had rented a couple lanes. This was the scene at this old bowling alley in Queens, NY.

We were getting ready to leave, and my date stepped away to go to the bathroom.

I waited by the shoe rental counter. I wasn’t scrolling Instagram because phones weren’t a thing then, and Instagram didn’t exist. Instead, my head was up, and I was people watching. Taking in the scene.

The scene included two young men from the group of bowlers closer to my age, arguing. One of them pulled a gun out of his waist, lifted it up, and shot.

In an instant, the collective instincts of every person in that bowling alley kicked in. We all started running for the only exit. As I was running, I heard gunshots behind me. I remember being terrified that one of them had hit me. In the melee of the crowd running for the door, I tripped and fell. Within seconds, a man snatched me up by my collar, placed me back on my feet and shoved me towards the door. Gunshots continued behind us.

Once outside, we started to feel safe again. I quickly scanned the parking lot for my “boy.” We found each other outside, jumped in his car and left.

I will never forget that night.

I wish that was my only encounter with guns growing up, but it isn’t.

There’s the time a friend of a friend, the same age as me, accidentally shot himself in the stairwell of the local housing projects. Luckily, he survived.

Or the time a boy my friend was dating pulled out a huge gun in the elevator with us. He wanted to show off. He laughed while he brandished it, and I just knew one of us was gonna get accidentally shot in that elevator.

Or the time a friend got shot in the abdomen on the corner of my street, and a group of us walked him to the hospital. (There was no other option).

There are more stories, but these are the ones I remember.

There have been 214 mass shootings—defined by Gun Violence Archive as one in which at least 4 people were shot—in the US within the first 145 days of the year.

This country has long been in desperate need of gun control. How many more horrific stories must we witness or, God forbid, experience first hand? Corrupt and apathetic politicians ensure that gun violence will continue.

So what can we do? Feeling powerless at times like these is what bothers me most. So here is a short list of things you can do:

Lastly, stay on your entrepreneurial journey. Keep working towards your financial freedom. When you have excess wealth, you can put your money towards electing politicians who actually represent your interests. You can create and/or fund organizations that are doing good work in the world. There is no knight in shining armor, we are gonna have to save ourselves.

PS: A reminder that the doors to the Club are still open by request of folks who understandably missed the Tuesday night deadline because of what happened in the world. We’re giving you plenty of space and time to consider joining. We’re not gonna send you a bunch of emails, but the doors are open until Tuesday, June 1, at 10am EST 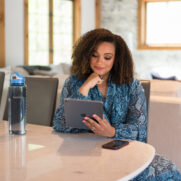 The WORST marketing strategy ever

You’ve heard of Social Media Marketing. Direct Mail Marketing. Email Marketing. But do you know about… Drama Marketing? 👀 Drama Marketing is when you: 👉 Talk trash about your competitors 👉 Spew negativity online 👉 Stir up petty drama, sometimes with folks in your industry It can sound like: “Don’t waste your time with [competitor].” […] 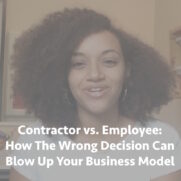 Contractor vs. Employee: How The Wrong Decision Can Blow Up Your Business Model

Business models. So complicated. So confusing. So “I have no idea what I’m doing.” Until you figure out the right one. And then you’re all “This is it! This is the magic! This is my key to take over the entire motherf&*^ing world, PEOPLE! #winning” But you need help. You can’t do it all alone. […]