I’ve talked before about how when I was 9 years old, my parents were both laid off and our lifestyle went from middle-class to lower-income. Even though they both eventually found jobs again, being unemployed was such a financial hit that our family barely recovered and certainly never lived the way we did before they were laid off.

This was hugely impactful for me. I was at that age where I was just understanding the ways in which money and work matter; that some of my classmates got to have tutoring, music lessons and summer camp, while others of us only had bicycles and the park to entertain ourselves after school and all summer. And that even though I got to go shopping at Macy’s with my mom and sister every season, my friend Hannah was wearing hand-me-downs from her cousins.

I think the experience of becoming “poor” overnight is the reason I’ve always been so determined to make my own money and ALOT of it. If making money is a game, seeing my parents stuck in a losing streak made me want to figure out the rules so I could beat the game entirely.

And I have. I’m really lucky (and proud) to raise my kids in a different kind of lifestyle than I was raised. Or to know that they’re not going to have to worry because even if I stopped working tomorrow, the empire that I’ve built would keep supporting us.

I make more money than my parents ever did – alot more – and that should make me feel accomplished and proud … so why do I sometimes feel so ashamed and guilty?

And I know I’m not alone in this: most of the women that I work with already make more money than their parents did. Or they’re going to hit that mark in the next couple of years.

Most of them make more money than their husbands. Or all of their friends.

That sounds pretty good as a marketing pitch: MAKE MORE MONEY THAN ALL YOUR FRIENDS! But the reality can be lonely, disorienting and divisive.

“What did I do to deserve all this?” A client asked me a couple weeks ago, and even though I could have rushed in to say you worked hard or you’re brilliant (both of which are true statements), I didn't. Because does that mean our friends and family aren’t brilliant? Does that mean our parents didn’t work hard? I know for a fact that my parents worked as hard, if not harder than I have, and so much of what I have is due directly to them.

This is not an email with an “answer” or a pat “you-go-girl” piece of encouragement.

I just want you to know that if you’ve ever felt ashamed or guilty about your success, or scared that your financial status will separate you from other people in your life, I get you. I’ve been there. Sometimes I’m still there.

The best solution I’ve found is to find other women who are also making a lot of money and start having an open conversation about the emotions behind it. If you don’t come from a family that earned six or seven figures, you don’t have a blueprint for how to deal with making that kind of money. Find other women who have similar incomes and talk to them.

This is especially true for women of color. We’re so scared of ostracizing our communities. We don’t want to act like our new life means we’ve forgotten where we came from or the people who helped us get to where we are. Find people who can relate to you in your current financial situation.

Most importantly, remember that we need YOU to be successful. We need money to be in the hands of women like you so we can start making this world better.

PS: We are currently accepting applications for my Million Dollar Badass mastermind. If you are a badass woman entrepreneur making $100k or more and want a system, sisterhood and support to help you scale, apply right here. After you apply, we’ll have a short, no obligation phone call to see if it’s right for you. xo 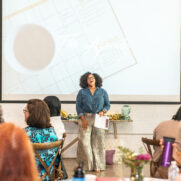 Grow Your Revenue, Your Business Model

How to plan, promote, and host a profitable virtual event

Why you should host a virtual event First, let me say that I love events. The connections. The energy in the room. The shiny handouts. The feeling that what you’re about to learn could change everything. I’ve been doing live events and workshops for years—in New York City, Paris, Los Angeles, and in Greensboro (my […] 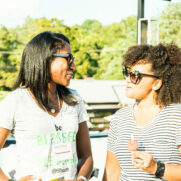 Strut Your Strengths, Your Business Model

The difference between a business coach and a therapist

I recently started seeing a therapist. I wish I could say that I had an exciting or unusual reason to see a therapist, but it was the same-old female business owner cliche: I’d been working hard in my business and working hard for my family and putting myself last, every single time. As the breadwinner […]