Skip to content
Note: This article is part of a month-long series showcasing lessons from inspiring black women entrepreneurs. Enjoy!

Sarah Breedlove was born on a Louisiana plantation on December 23, 1867, a mere two years after the 13th Amendment was ratified. Her parents and older siblings had been enslaved on that same plantation that they continued to work as sharecroppers. Sarah was the only member of the family born free.

Nothing about Sarah’s journey to success was easy (sound familiar?). Her parents both died by the time she was 7 years old. She moved in with her sister, whose husband was cruel. She married at merely 14 years old to escape her brother-in-law. At 17, she became a mother to her only child, A’lelia. By 20, she was a widow.

Sarah moved to St. Louis where her older brothers lived. She earned $1.50 a day as a laundress and continued to long for more. She earned just enough to send her daughter to school, something she didn’t get to do as a child. She married a second time in 1894, though her husband was unreliable and unfaithful. They divorced a few years later. During this time, Sarah’s eyes were opened to a new way of viewing the world through her friendships with other women that she met at her church and through the National Association of Colored Women.

In 1905, Sarah met her third and final husband, Charles Joseph Walker, a newspaper advertiser. Sarah started working for a black woman entrepreneur, Annie Malone, selling Annie’s hair care products. Sarah had suffered from significant hair loss since the 1890’s, and she decided to use what she learned working for Annie to solve this problem for black women. At the age of 39, Sarah became known as Madame CJ Walker and started her own company.

Madame CJ Walker’s hustle was strong. She turned her hair care company into a wild success at a time when black people had no access to capital or other forms of business support. Madame Walker wouldn’t have even been allowed in hotels on business trips. But she brilliantly turned these limitations into advantages. She went on a year and a half tour of the South demonstrating her products for black women at church gatherings. She also went door-to-door selling her products. Because she couldn’t stay in hotels, she would stay with local black leaders, such as doctors and ministers, in the various cities she visited. It turned out to be a brilliant marketing strategy and her products quickly became well-known.

Perhaps my favorite part of Madame CJ Walker’s story is that she was lifted up by her female friendships at a particularly low point in her life. And when she became a wealthy woman, the sole owner of a company worth over a million dollars in the early 1900’s, she did the same. She established Lelia College in Pennsylvania in 1908 to train black women to become “hair culturists.” In a short period of time she trained 40,000 women to become sales agents and have the option to open their own shops.

“I am not satisfied in making money for myself. I endeavor to provide employment for hundreds of the women of my race.” – Madame C.J. Walker

As women entrepreneurs there is so much we can learn from Madame CJ Walker’s story. She was an orphan, a single mother, a widow, poor, born to slaves and uneducated, but she did not let her past dictate her future. When a vision for her hair care products came to her in a dream, she went all in. She traveled non-stop for a year and a half to reach her ideal clients and let them know about her products. She established her own school and factory. And made massive contributions to the advancement of black people, both financial and otherwise.

What I love most about her is that she didn’t sit around and wait for opportunities come her way. She didn’t post a couple of advertisements and expect that to do the trick. She did not hide. She got her hustle on and made sure everybody would know her name. And it worked. She was the first female self-made millionaire. And 100 years later we’re still talking about her.

Ready for some bold action?
Ready to take a risk, put yourself out there, be seen and let the people know your name? Then take some bold action and bring your behind to Dance + Coaching in New York City next weekend. There is no better way to put yourself out there then to dance when other people are watching. But trust me, we’ll all be taking the same risk and the bond you’ll have with your fellow women entrepreneurs will be magical. In addition to the sisterhood, you’ll also enjoy brunch and coaching. Get all the details and sign up right here. 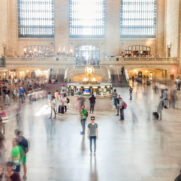 If You’re Always Hustling to Build Your Business You’re Doing It Wrong.

I have a question for you: do you consider yourself a hustler? According to dictionary.com the definition of a hustler is: “an enterprising person determined to succeed; go-getter.” Seems legit. Seems like something we should identify with as business owners trying to make something out of nothing. (Because, although it’s not often said aloud, making […] 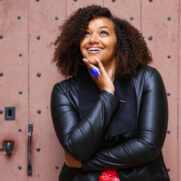 I made you something special (and it’s free!)

Do you feel the magic in the air? There is something about moving into winter and the holiday season that makes it the perfect time to both reflect and allow yourself to dream big about what you want your life and business to look like in 2017. To that end, I have lots of exciting […]