If you feel cynical about voting, that’s understandable.

With our nation’s long and racist history of voter suppression, and with faulty ballot counting machines and Russian hacks and God only knows what else, it’s easy to lose faith in the democratic process.

It’s entirely understandable that you might think, “Voting is pointless. My vote doesn’t matter.”

And you know what?

That is exactly what the vile Orange Cheeto and his cronies want you to think.

Because when you believe that you are powerless, then the bullies have won.

To quote My-President-Forever Barack Obama, in his speech at the recent DNC, “They are counting on your cynicism.” He adds, the current administration is “hoping to make it as hard as possible for you to vote, and to convince you that your vote doesn’t matter. That’s how they win.”

He’s right. And we can’t let that happen.

3 reasons why you absolutely must vote:

1. Because some elections are incredibly close. Which means every vote matters.

Back in 1876, Rutherford B. Hayes got elected President and won the electoral college by a single vote.

And back in 2016 (which honestly feels like a century ago) in many swing states, Donald Trump’s margin of victory was less than 1 percent. Painfully close. Just a few more votes for Hillary Clinton might have made all the difference.

Do you really want to be sitting on your butt on the day after the election, and learn that Trump won again by a razor-thin margin, and you could have made a difference…if you had voted? You do not want to be that person.

2. Because people faced racial terrorism and marched and fought and risked their lives so you could vote.

Black women like Fannie Lou Hamer and Ella Baker fought tirelessly to get the Voting Rights Act of 1965 signed into law. Don’t dishonor your ancestors by not voting.

If you skip voting, Fannie and Ella’s ghosts will haunt you. Their faces will scowl at you from your foggy bathroom mirror every day when you step out of the shower, and you know what? You deserve it.

3. Because your vote is more powerful than you think.

Why do you think the Patriarchy has worked so damn hard over the centuries to keep Black folks and women away from the polls? Because voting is extremely powerful.

Dr. Rachael Cobb, PhD, chair and associate professor of government at Suffolk University, asks, “Why would people spend so much time trying to take political power away from people?” The answer: “Because political power actually matters.”

Over 66,000 people receive this newsletter. Including you.

If every single person reading this email votes—and convinces 5 other people to vote—that would be 30,000 votes. That could be enough to move the needle and get Trump OUT. But this only works when EVERYONE participates and does their part. Still think your vote doesn’t matter?

And, if you run a small business, have a blog, host a podcast, write a newsletter, or have a social media following (any size, big or small) that means you have a platform. You have people listening to you. People who know, like, and trust you.

Use your voice. Use your power. Urge your community to vote. Whether you have a community of 10 clients or 100,000 fans, whatever the size, you are more influential than you think.

Do those 3 things. Bare minimum.

Taking no action and sitting on the sidelines? That feels disempowering.

Doing something? Taking action? Even when the system is not perfect? That feels much more empowering than being passive and doing nothing.

Go vote for your life.

Let’s let Barack have the final mic-drop on this one:

“Do not let them take away your power.” 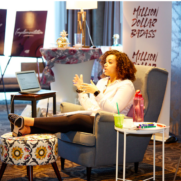 Who are you spending your time with?

Last week, I sat in a room with all 28 of the women in my Million Dollar Badass mastermind group. Coaches. Consultants. Entrepreneurs. Manufacturers. They had traveled from across the country to meet together and plot out how they were going to get their businesses to seven-figure revenue. Here’s what I saw: So much diversity […] 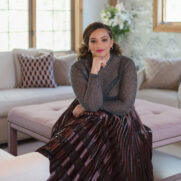 Wanna hear something that makes me furious? (There’s something so powerful when we’re all angry about the same thing.) According to the latest research, Black content creators make 35% less than white creators. While Black creators drive innovation, ideas, creativity, and artistic freedom, they still earn less than their white peers. Even worse, they’re often […]